We are now living with COVID-19 for almost an entire year. Lockdowns are no longer a novelty, and any assumptions I may have had about how the global pandemic would affect women have been soundly kicked to the curb. When we were first told to work from home, my initial reaction was one of hope. If now both parents, and obviously here I am referring to households with two working adults, were not leaving, then surely this will reorient the household work and childcare responsibilities? That we would see a shift as now both took these chores upon themselves equally.

The pandemic far from being a great equalizer has pushed women not only out of the workplace but is also impacting them more significantly. As noted in the World Economic Forum’s report Women in the Workplace 2020, at the end of 2020, millions of women were considering leaving the workforce for good.

“1 in 4 women is contemplating what many would have considered unthinkable less than a year ago: downshifting their careers or leaving the workforce. This is a critical moment for corporate America. Companies risk losing women in leadership—and future women leaders—and unwinding years of painstaking progress toward gender diversity.”

Elsewhere, a UK report found that mothers were 1.5 times more likely than fathers to have either lost their job or quit since the lockdown started. Minorities and women of color are even more negatively impacted. The report states that “compared with women overall, Latinas are more likely to worry about layoffs and furloughs. And LGBTQ+ women are almost twice as likely as employees overall to cite mental health as one of their biggest challenges during Covid-19.”

One of the main reasons for these dramatic job loss numbers? McKinsey’s analysis found that women’s jobs are 1.8 times more vulnerable to the crisis than men’s. One reason for this is that so many women are employed in industries decimated by the pandemic. The hospitality sector employs more women than men.

It is just in the economic arena that women are suffering. Data from the UN shows an upsurge in calls to domestic violence helplines across the globe.

Why pay parity is more important than ever

However, there is another issue at play here. Often the main reason the woman is the person to give up her job is purely economic. Who makes more money? When both parties are employed, it makes sense for the person with the higher income to stay and their job and the other person to leave. Here’s where the problem starts because, as we all know, the level of pay inequality is astounding.

According to the most recent data, in 2020, women make only $0.81 for every dollar a man made. The controlled gender pay gap, which considers factors like job title, years of experience, industry, and location, found that women make $0.98 for every $1 a man makes. While within this controlled data, the largest gap is between the earnings of black or African American women and white men. As noted in the report, black women make $0.97 for every dollar a white man with the same qualifications makes.

At first glance, this appears to suggest that the difference in earning power is relatively low when you compare like with like. However, it is more nuanced than that, and that’s why it needs our attention. While men and women on the same level may receive similar pay, the problem is that there is empirical evidence that men get promoted at a faster pace than women. The higher up the ladder the higher the salary, and herein lies the challenge. This is why it is not just the salary that we need to think about – by calculating presumptive raises given over a 40-year career, women stand to lose $900,000 on average over a lifetime. 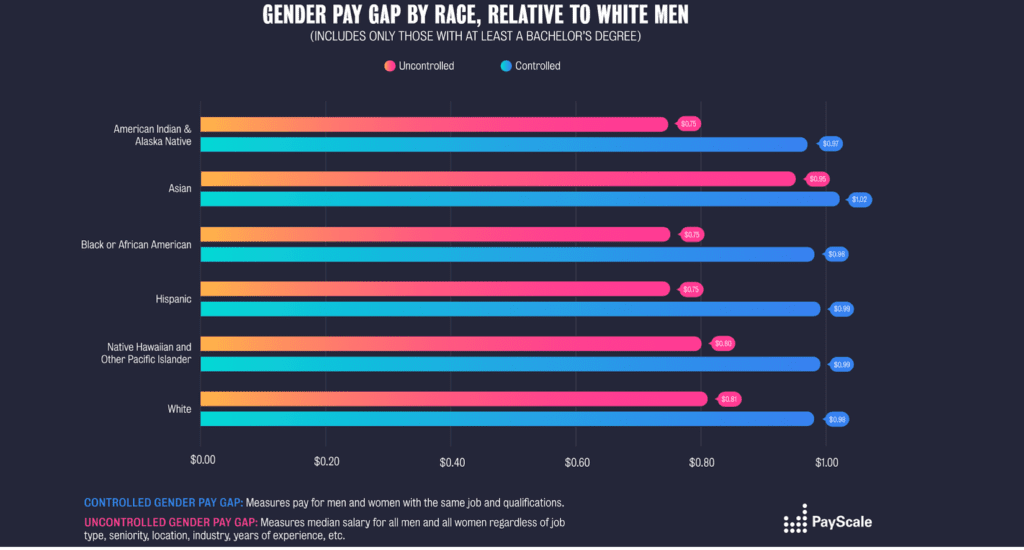 Source: The State of the Gender Pay Gap 2020

Research shows that when women have children it adversely impacts their earning potential. The so-called “Motherhood Penalty” leads to working mothers being perceived  as less devoted to their work and requiring a more flexible schedule. Statistics show that the pay gap is much higher for women with children.

How payroll analytics can raise awareness about gaps in your organization

While many factors contribute to pay inequities, one of the ways to address it is by identifying where the gaps are and then seeking to bridge the void. Many employers are unaware that there is a difference. Part of the problem is a lack of data, a lack of knowledge around current pay scales. From a 2020 report, we know that more than half (56%) of respondents said their organizations do not have a formal process to address pay equity, while 70% do not use salary structures to manage pay.

To redress this information disparity, and as part of our work for customers who operate in the UK, we developed a standard report that clearly shows the way an organization pays its employees based on gender and age. 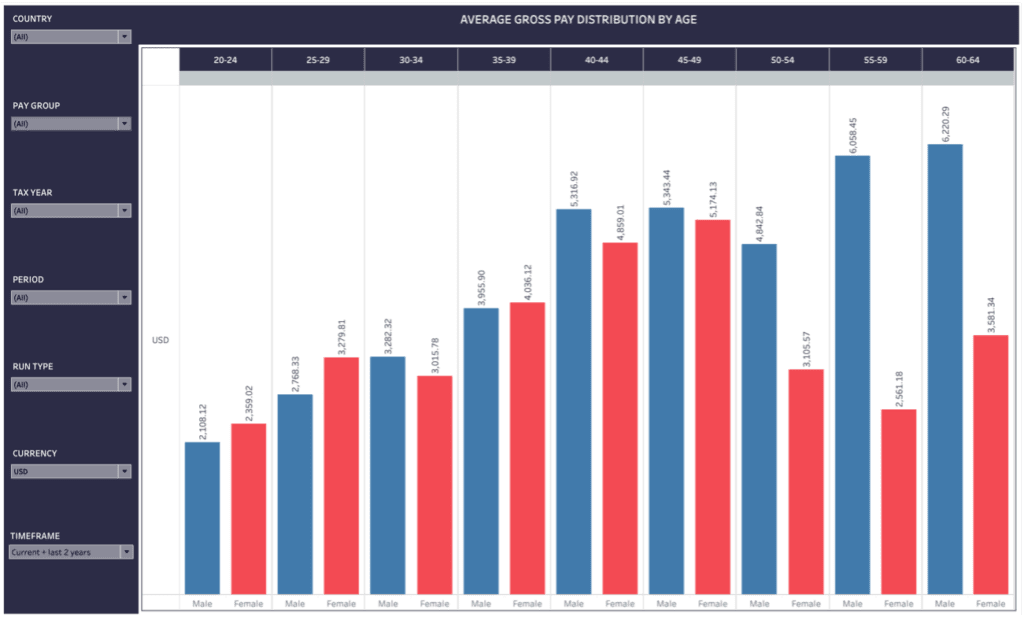 By measuring the differential, organizations can make informed decisions about how to change and achieve pay equity.

As well as the country by country analysis, we also provide global comparisons for Gross and Net pay.

Why it is important to track data

Apart from the fact that it is a legal requirement in the UK, there is also the inherent bias we have towards tangible proof. Cindy Robbins is President and Chief People Officer at one of my favorite companies Salesforce. When she joined, she told Marc Benioff that she suspected women in the company were receiving less pay than their male colleagues.  He was horrified – “Holding equality as a value is not just a matter of fairness or doing the right thing. Nor is it about PR or “optics” or even my own conscience. It’s a crucial part of building a good business, plain and simple.”

Cindy and her team developed a methodology with an outside consulting company that analyzed the entire employee population to determine unexplained differences in pay. To date (2019 figures), Salesforce has spent a total of $10.3 million to ensure equal pay for equal work.

In short, people want proof. Without reports and robust visualizations, it is easy to “assume” that everything is fine and that you are doing right by your employees. With the data, organizations can gain a better understanding of how they are paying their employees and if there are any glaring differences, which they can then address.

How to Fix Gender Inequality at Your Company, From the HR Exec Who Helped Close Salesforce’s Pay Gap

HCM Integration: What to Look for When Selecting a New Payroll Provider

The Key to Managing Payroll Across Multiple Tax Jurisdictions